Using OsmAnd on a motorbike

In this article I write some notes about using and Android device (actually a smartphone) as a GPS navigation system on a motorbike. The choosen software is OsmAnd; a mature and full-featured navigation system based on the OpenStreetMap geographic data. I tested two different smartphones: a ZTE Blade A610 and an Oukitel WP12.

First of all, it is necessary to make a premise: I usually travel at very low speeds, hardly exceeding 90 km/h. My bike, despite being a 650 cc twin cylinder, has few vibrations and I only occasionally drive on dirt roads. Here I tell you what is my setup, which is working well for my needs, but you must adapt the mounting to your specific scenario.

I provided both the smartphones with a flexible TPU cover. The ZTE is quite thin, so it is blocked firmly by the holder without any additional precautions. Instead the Oukitel is thick and heavy enough that the gaff clips on the phone holder do not tighten it sufficiently.

The Blade A610 is not waterproof, so it can only be used when the weather is nice.

Instead the WP12 is rated as IP68, i.e. it should be dust-proof and it should resist even to immersion into water at 1 meter depth. However, the water resistance of the WP12 is ensured by a rubber flap protecting the power connector, so it is not possible to keep the smartphone charging when it rains.

To keep the ZTE permanently connected to the charging cable, I purchased a micro-USB magnetic adapter (specifically a NetDot 10th Gen). The magnetic adapter is quite convenient to plug/unplug the power connector even wearing gloves and it prevents damages if you inadvertently pull the cable.

In the photo above you can see two adapters: one fitted into the phone connector and the one that I carry with me as a spare part. I used just a bit of silicone adhesive to make the plug more stable and to prevent dust from entering. It turned out that the magnetic coupling is quite strong and stable to resist to vibrations and wind. You must pay attention to avoid dust into the electric contacts, which are rather delicate and can actract ferromagnetic dust.

Reading the screen even under a brigth sun is a must-to-have for a motorbike navigation system. It is not simple to know the brightness specification of a smartphone, especially for the low-end models. In my case the ZTE performed noticeably better than the WP12. From the following photo you cand barely notice that the ZTE screen (on the left) is brighter than the other (WP12 on the right); the JPEG image measures a brightness higher by only a 4%, but the user experience with the ZTE is actually better. 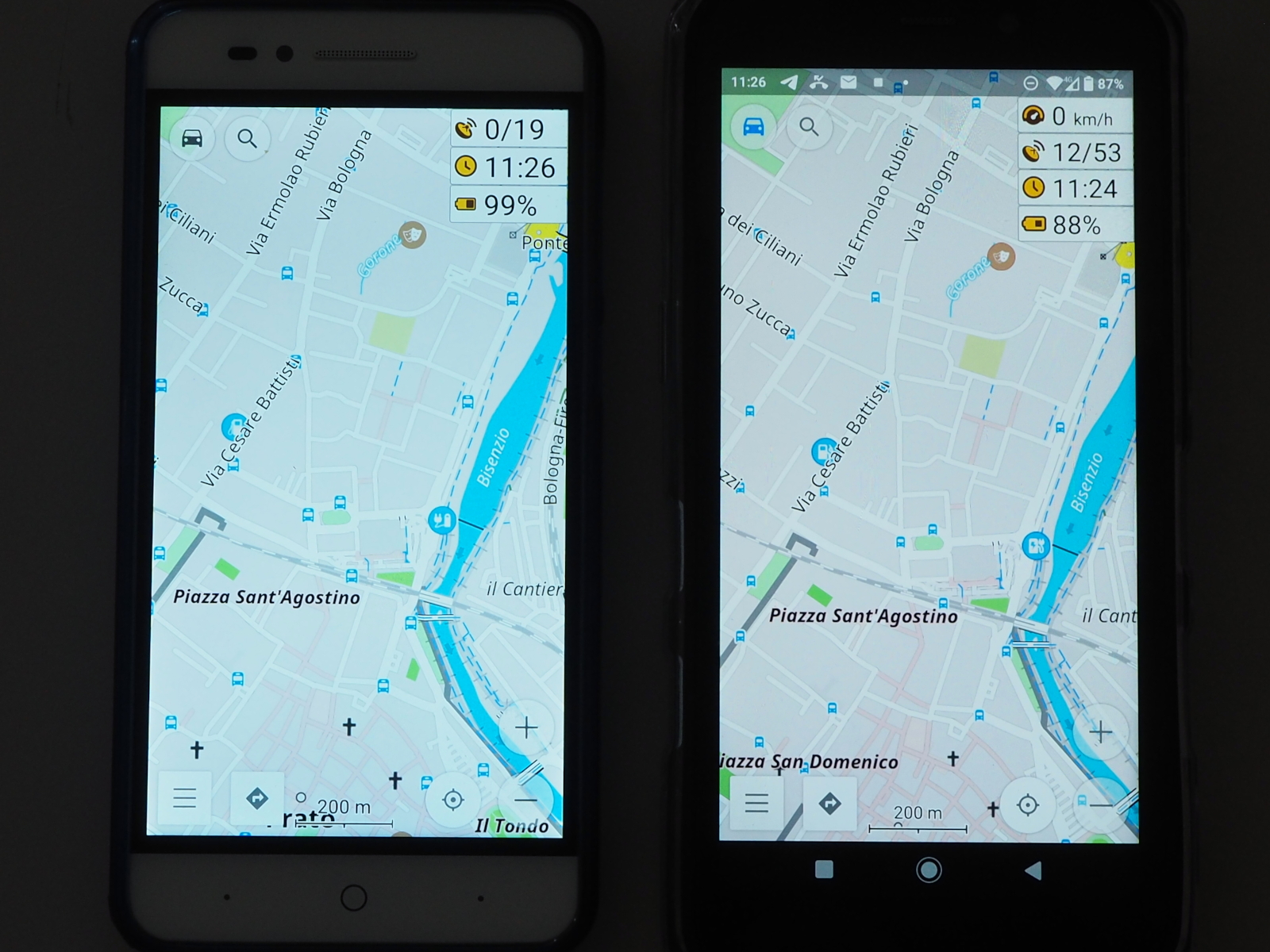